The Decolonial Turn and the Humanities Curriculum:

(in collaboration with UCT, UFS, Rhodes, US, UWC, Wits and UKZN) 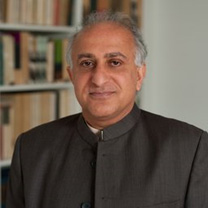 Currently a Consulting Fellow at the Andrew W. Mellon Foundation, between 2014 and 2018 he served as the Foundation’s first Program Director of International Higher Education & Strategic Projects. His portfolio encompassed grantmaking in the arts and humanities to research universities in South Africa, Uganda, Ghana, Egypt, and Lebanon and to pan-African and pan-Arab institutions working in higher education.

In 2006, Saleem became vice-chancellor of Rhodes University, the first black South African to hold this post in 102 years, with a commitment to institutional transformation and modernisation and academic excellence.

Saleem is author of Black Student Politics, Higher Education and Apartheid, and Black Man, You are on Your Own; co-author of National Policy and a Regional Response in South African Higher Education, and co-editor of Apartheid Education and Popular Struggles in South Africa. In 2012 Jacana Press and Brill published his latest book, The Forgotten People: Political Banishment under Apartheid.

His numerous book chapters, journal articles, policy reports, and newspaper opinion pieces are concerned especially with questions of equity, redress, and social justice in and through universities, and the decolonization and transformation of universities in societies that were colonized.

His current research and writing encompass a history of universities in South Africa that seeks to clarify contemporary challenges, a memoir on his time as the vice-chancellor of Rhodes University, and an edited monograph on difference, equity, diversity, and inclusion in higher education. He aspires to also produce a series of children’s books that raise social justice issues.

He serves on the boards of the Centre for Higher Education Trust and of Our Compelling Interest, based at the University of Michigan, and was a trustee of the Mandela Initiative Think Tank on Strategies to Overcome Poverty and Inequality. He is a former chairperson of Higher Education South Africa and of the Association of African Universities Scientific Committee on Higher Education. 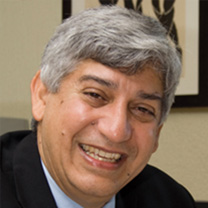 Ahmed Bawa is a theoretical physicist. He currently holds the position of Chief Executive Officer of Universities South Africa (USAf).

He has served as the Program Officer for Higher Education in Africa with the Ford Foundation and during this time led and coordinated the Foundation’s African Higher Education Initiative. He worked closely with the Association of African Universities, the Council for the Development of Social Research in Africa and so on.

Ahmed Bawa holds a Ph.D. in Theoretical Physics from the University of Durham, in the UK. He has published in the areas of high energy physics, nuclear physics, higher education studies, science education and to some extent in the area of science and society.

He served on a number of policy development teams in the post-1994 period and was an inaugural member of the National Advisory Council on Innovation till 2002.  He is Fellow of the Royal Society of South Africa as well as the Academy of Science of South Africa of which he was one of the inaugural vice-presidents. He also served as Chair of the Board of the Foundation for Research Development and later served on the Board of the National Research Foundation and was Vice-Chair of the board the Atomic Energy Corporation. He serves on several international advisory boards. 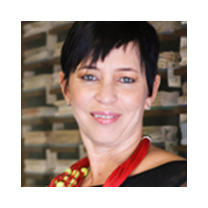 Loretta Feris was appointed Deputy Vice-Chancellor (DVC) for Transformation on 1 January 2017. She is primarily responsible for the student affairs and transformation portfolios, focusing on decolonisation and transformation as it affects both students and staff. She currently chairs the Rapid Response Task Team (RRTT) and leads research and engagement on fee-free higher education.

She is a National Research Foundation-rated researcher whose work is aimed at shaping conversations around environmental law and human rights, accountability and social justice – both in South Africa and around the globe.

Before joining UCT she was associate professor of law at the University of Pretoria, where she was instrumental in developing a master’s programme on trade and investment law in Africa. She spent time at the Washington College of Law at American University in Washington DC, first as an International Legal Studies fellow and later as assistant director of the International Legal Studies Programme, assistant coordinator of the Humphrey Fellowship Programme and adjunct professor of law.

Feris joined UCT in 2009 as associate professor in the Faculty of Law, where she was director of the Institute for Marine and Environmental Law before her appointment as DVC.

She has served UCT in several positions, including:

Feris advises the United Nations Environment Programme on priority areas for the environmental law agenda in respect of the Montevideo Programme IV process. She is a law commissioner of the International Union for Conservation of Nature (IUCN) and a member of the IUCN Academy of Environmental Law. 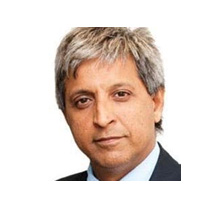 Adam Mahomed Habib (born 1965) is a South African professor of political geography, and the Vice-Chancellor and Principal of the University of the Witwatersrand (Wits) in Johannesburg, South Africa.

He has held academic appointments over the last decade at the Universities of Durban-Westville and KwaZulu-Natal and the Human Science Research Council. Prior to being appointed Deputy Vice-Chancellor Research, Innovation and Advancement at the University of Johannesburg, he served as the Executive Director of the Democracy and Governance Programme of the Human Science Research Council. Before that, he was the founding director of the Centre for Civil Society and a research professor in the School of Development Studies at the University of KwaZulu-Natal. 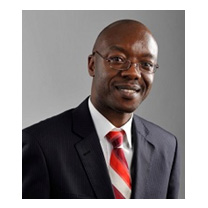 Professor Tawana Kupe was appointed Vice-Chancellor and Principal at the University of Pretoria in January 2019.

Prior to this appointment he held several senior positions at the University of Witwatersrand, including his role as the Vice-Principal responsible for running the University. Prior to that role he was the Deputy Vice-Chancellor for Advancement, Human Resources and Transformation. He also served as Deputy Vice-Chancellor for Finance and Operations, and was Executive Dean of the Wits Faculty of Humanities. 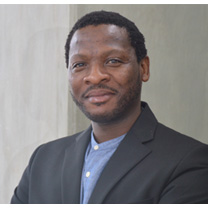 Tshepo Madlingozi holds a PhD from the University of London, as well as two Masters degrees in law and sociology from the University of Pretoria, where he has been based for over 16 years. He has shown a deep commitment to social justice not only through his teaching and extensive publication record, but also in his activism. Over the past 13 years, he served as the national advocacy co-ordinator and a board member of the Khulumani Support Group, which represents over 85,000 victims and survivors of apartheid-era gross human rights violations.

In addition to his work at Khulumani, Madlingozi has served on the boards of a number of human rights and social justice organisations, including the Centre for Human Rights, University of Free State; the Socio-Economic Rights Institute of South Africa; Zimbabwe Exiles Forum; the Council for the Advancement of the South African Constitution and amandla.mobi. He has also consulted for the Office of the United Nations High Commissioner for Human Rights and the Pan-African Parliament and was appointed to the Advisory Committee of the South African Law Commission: Project 25 on Statutory Law Revision. 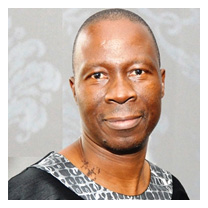 Nhlanhla Mkhize, PhD, is Deputy-Vice Chancellor and former Dean and Head of the School of Applied Human Sciences at the University of KwaZulu-Natal (South Africa). He teaches modules on African Psychology & Ethics, with reference to African philosophical underpinnings to ethics and also touching on the interface between culture, health and illness. He has been invited to give keynote addresses nationally and internationally on the subject of indigenous knowledge systems, morality/ethics and the self.

He has published journal articles and book chapters on cultural aspects of counseling, career counseling, African psychology, and ethics. He was a member of the International (African) Reference Group that participated in the revision of the International Code of Ethics for Occupational Health Therapists. Of late he has been interested in language and instruction and has been involved in isiZulu terminology development and translation for Psychology and other Social Sciences disciplines. 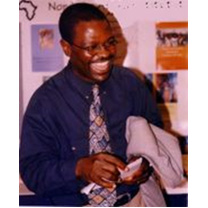 He has taught sociology, anthropology and communication studies at universities in Cameroon and Botswana, and has researched and written extensively on Cameroon and Botswana, where he was awarded the “Senior Arts Researcher of the Year” prize for 2003. In October 2012 he received a University of Cape Town Excellence Award for “Exceptional Contribution as a Professor in the Faculty of Humanities”. He is recipient of the “ASU African Hero 2013” annual award by the African Students Union, Ohio University, USA, and of the 2014 Eko Prize for African Literature.

He is a B2 rated Professor and Researcher by the South African National Research Foundation (NRF) since 2010, a Fellow of the Cameroon Academy of Science since August 2011, a Fellow of the African Academy of Science since December 2014, and Chair of the Editorial Board of the South African Human Sciences Research Council (HSRC) Press since January 2011. 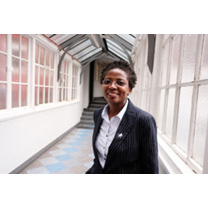 ’Funmi Olonisakin is Professor of Security, Leadership and Development at King’s College London and has been founding Director of the African Leadership Centre (ALC), which aims to build the next generation of African scholars and analysts generating cutting-edge knowledge for conflict, security and development in Africa. The ALC is based in Nairobi, Kenya and at King’s College London.

Professor Olonisakin is currently Vice-President and Vice-Principal International at King’s College London. She has lead responsibility for all international matters at the College.

Prof. Olonisakin is also a Research Associate with the Department of Political Sciences, University of Pretoria, South Africa, where has been appointed a Mellon Foundation Distinguished Scholar on Peace and Conflict. The Geneva Centre for Security Policy appointed her as a Distinguished Fellow in April 2014. She was Director of the Conflict, Security and Development Group at King’s College London from 2003 until 2013.

Prior to this, she worked in the Office of the United Nations Special Representative of the Secretary-General on Children and Armed Conflict overseeing the Africa work of that Office. In this role, she facilitated the establishment of the National Commission for War-Affected Children in Sierra Leone and the Child Protection Unit in the Economic Community of West African States (ECOWAS). She previously held research positions in the Centre for Defence Studies, King’s College London, where she co-directed the African Security Unit; and at the Institute for Strategic Studies in the University of Pretoria, South Africa and the Department of Political Science, University of Lagos Nigeria.

We're not around right now. But you can send us an email and we'll get back to you, asap.